Types of protein supplements – which one is the best for you? 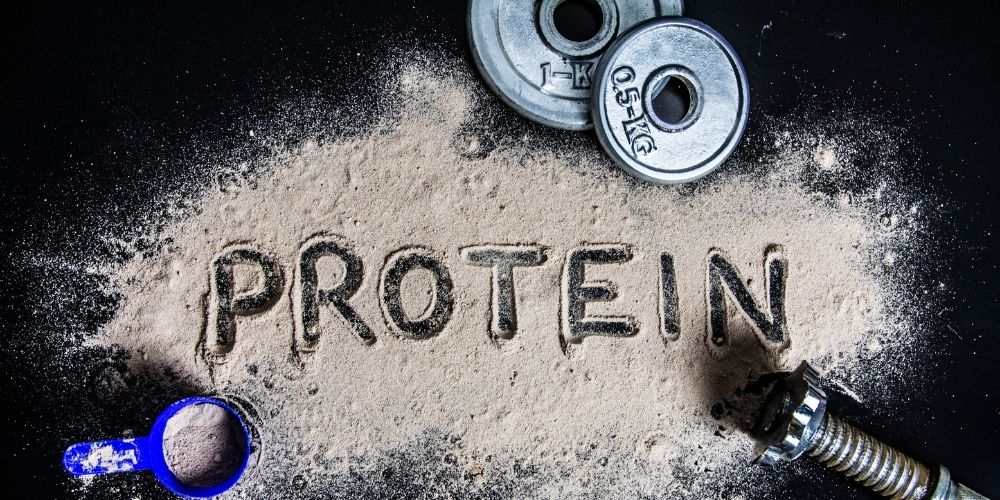 One way to classify proteins is the rate at which they are absorbed into the blood. Slowly absorbable proteins are those that slowly and gradually release amino acids into the blood. Catabolism is then temporarily stopped, thanks to which they provide protection for the muscles. Most often, it is recommended to reach for these proteins in the evening, because during sleep the level of cortisol, i.e. the stress hormone responsible for catabolism, increases.

Rapidly absorbed proteins are characterized by the fact that they are absorbed by the body in a very short time. They are characterized by high bioavailability and are quickly digested. You can take advantage of this feature by reaching for them immediately after exercise to provide the muscles with amino acids to nourish them. However, you can also take them in the morning, immediately after waking up or before training. Taking certain types of proteins at different times also has benefits, but they may be less pronounced.

The most common, more detailed, breakdown of proteins is the one that takes into account their source of origin. In most cases these are: whey, casein, albumin, vegan proteins (soy, pea or rice protein isolates, containing only plant proteins), or beef.

Whey is a residue left over from cutting cow's milk and has an extremely high protein content. Casein is a protein from mammalian milk that has been extracted by bleeding, while albumin is produced from eggs. Due to the more detailed division, which also takes into account the protein content in the supplement, especially the following are distinguished:

As the name implies, whey protein isolates come from milk. They are obtained in the CFM process, i.e. at a very low temperature, and they are famous primarily for their very high protein content - in their case it reaches as much as 90%, sometimes even 98%! This is extremely high, especially since there are no supplements that contain only proteins. They are supplements with almost the highest degree of purification, with minimal carbohydrate and fat content.

It is very important for people intolerant to lactose that whey protein isolates almost do not contain this sugar in the composition. Therefore, most people suffering from this condition can supplement these products. There is also no cholesterol or saturated fatty acids in the isolates. Instead, they contain glutamine peptides, CLA (conjugated linolenic acid and the best absorbable iron - lactoferrin.

They are slightly more expensive than other types of protein supplements, but this is due to the high supply of protein. This type of protein is absorbed very quickly, so it is recommended primarily in the period of fat reduction, preferably in the morning, before or after training. Interestingly, whey protein isolates also show some bactericidal activity.

The protein content of the concentrates is lower than that of the isolates, however it is still 70-80% and therefore high. They also come from milk and contain small amounts of fats and carbohydrates. These macronutrients give them a very good taste, and it is due to their taste, they are very popular.

Whey protein - not only in concentrates, but also in isolates and hydrolysates - contains all the BCAA branched amino acids that are needed by athletes. These include valine, leucine and isoleucine. They stimulate muscle regeneration after the end of physical activity and stop the catabolism of muscle tissue. In addition, concentrates are quickly absorbed into the bloodstream, which is why their use is most often recommended immediately after training. They are especially recommended during the period of building muscle mass.

Whey protein concentrates are the cheapest supplements made from whey due to their lower degree of processing. It is also the most popular form of protein on the market. In addition to the anabolic effect, the concentrates also show properties to improve the body's immunity. They increase the level of glutathione, which is a very effective antioxidant and detoxifying compound. Concentrates are obtained through micro and ultrafiltration.

The protein content in the hydrolysates ranges from 80 to 95%, which makes them the purest and best digestible of all whey proteins. They are obtained in the process of hydrolysis, which consists in breaking long peptide chains into short ones under the influence of protoelytic enzymes. Shorter chains are characterized by much better digestibility, they are also digested faster. This type of supplement contains only trace amounts of carbohydrates and fats.

The choice of whey protein hydrolyzate is especially recommended for people suffering from digestive system ailments. The content of fats and milk sugar in this product is extremely low. The advantage is also a very short absorption time, which ranges from a quarter to an hour. Therefore, hydrolysates are taken immediately before or after training, when there is a need to nourish muscle cells as soon as possible.

Supplementing with this type of protein supplement also contributes to an increase in insulin levels. It supports the transport of ingredients to muscle and other cells. However, it should be borne in mind that the taste of this supplement is definitely worse than that of the concentrate, and the price is clearly higher than that of other whey-based products.

It is a natural, undenatured form of casein found in milk. It constitutes the vast majority of proteins found in cow's milk and in some respects has properties similar to whey protein, especially the amount of exogenous BCAA amino acids. However, it is a protein built by larger protein molecules, which makes it much longer to digest and absorb it.

Contrary to whey protein, casein is not very nutritious, but rather medium. Although this product is made from milk, it is low in lactose. The most characteristic feature of casein, however, is its very slow breakdown in the body. For this reason, it is recommended to take it primarily at night, because consuming it in the evening provides the muscles with access to solid building material. They grow during regeneration, so combining it with access to a rich source of protein guarantees growth. Casein nourishes the muscles long after the white whey stops working and it induces the best nitrogen retention and utilization.

It is highly recommended to take this supplement also before a long break between meals, because it provides a constant supply of building materials for the muscles. After consuming casein, amino acids are continuously released into the bloodstream, making it an ideal agent to fight catabolism. In addition, long-term muscle nutrition is very nutritious for the body, but micellar casein is less effective as a supplement taken immediately after training.

Like casein, these are proteins that are absorbed slowly. Therefore, they are most often used in the evening, shortly before bedtime. The protein content in their composition is 60-70% and it is a standard, non-fat source of this macronutrient. The degree of protein yield found in ovalbumin is the highest possible, so it is called the reference protein. The concentration of BCAA in ovalbumin supplements is very high, supplements based on it contain a full amino acid profile and high biological values. Egg protein is sometimes considered the best in terms of anabolic effect, because it is very rich in leucine, but also egg white supplements are clearly more expensive than others.

Until recently, vegan proteins were the least popular in the world of bodybuilding, but they are increasingly used due to the exclusion of dairy and meat from the daily menu due to dietary preferences. These are proteins that are quickly absorbed, and the content of this macronutrient in the nutrient is about 80%. Among all plant sources, soybeans provide the best amino acid composition.

The soy protein isolate contains a full set of essential amino acids in amounts and proportions close to the human body's demand. Soy protein strengthens bones, immunity and regulates the hormonal balance. It increases the effectiveness of fat burning because it increases the activity of thyroid hormones and insulin. It also prevents the formation of atherosclerotic lesions and can lower blood sugar levels. This protein is the slowest excreted from the body, thus preventing the loss of valuable nitrogen and positively influencing the calcium metabolism.

Soybean-based supplements contain a lot of arginine, which accelerates muscle recovery after training. In addition, plant-based proteins include those based on rice, peas or hemp. Regardless of their source, however, they are slightly inferior in solubility and digestibility, and don't taste as good as most alternatives. The phytoestrogens they contain show health-promoting properties.

It is another product that is quickly absorbed and has a high protein content - around 90%. Despite the high price, its quality and bioavailability are not at the highest level. Beef protein has a similar nutritional value to vegetable protein and contains negligible amounts of fat, but it also lacks some essential amino acids. Based on the amino acid composition of these supplements, it can be determined that the proteins in this type of supplement come mainly from the ox's connective tissue, i.e. cartilage and tendons.