The effect of creatine on the development of muscle mass 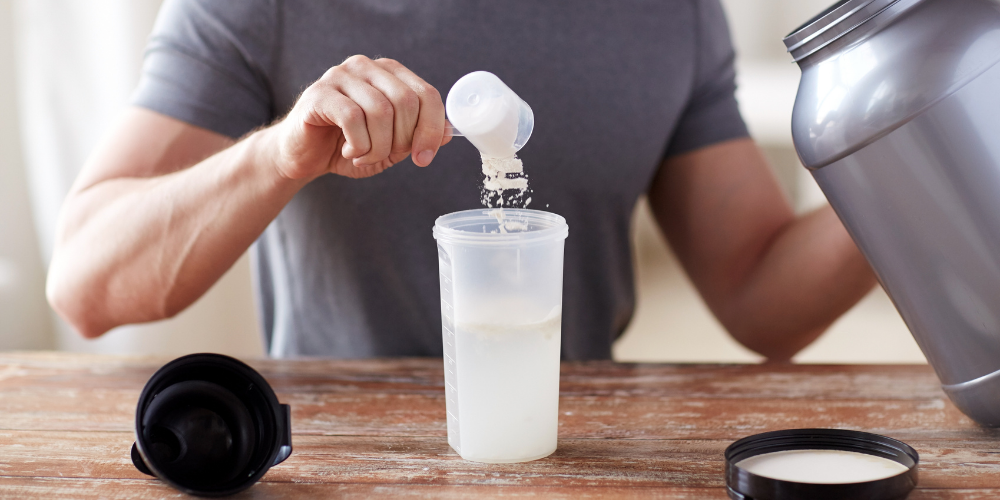 Muscle mass is most often defined as striated skeletal muscles. The appropriate level of it and taking care of its sustainable development bring many benefits in everyday life and are very important for health and the optimal functioning of the body. Muscle mass is an essential element in improving performance in virtually all sports, and it also helps to avoid injuries. Creatine supplementation can help in building muscles.

The most important sources of creatine in the diet are products of animal origin, especially meat, including fish, as well as processed meat. Cod is the richest source of this amino acid, but beef, pork loin, and chicken or turkey breasts are not much behind it. Among vegetarians and vegans, the level of this substance is usually lower, but supplementation is an alternative form of meeting the demand for it. This is important not only when building muscle mass, but also in the treatment of neurological diseases such as Alzheimer's, Parkinson's, Huntington's and epilepsy. The brain needs large amounts of ATP molecules to function optimally, and this organ also contains high levels of creatine and its phosphate.

In the human body, creatine is found primarily in the muscles, but also in the liver, kidneys and brain. For this reason, it is not included in the group of essential nutrients, but the demand for it is about 2 g per day (the demand for this substance is higher when the body weight is over 70 kg). The process of chemical transformation leads to its transformation into phosphocreatine and it is in this form that it is used to store energy in the body. Very often, however, creatine is associated as a dietary supplement to increase muscle mass. How does creatine work?

The most important function of creatine is its effect on the renewal of adenosine triphosphate molecules, i.e. ATP. It is the basic energy carrier in the human body. It is ATP that provides the right amount of strength for training and work. Maintaining a sufficiently high level of these molecules is especially important in the period between training sessions.

Importantly, creatine is one of the most thoroughly studied supplements and is recognized by experts as a safe substance. However, it should of course be taken only in appropriate doses and be careful about side effects, which are not dangerous, but may appear. These include diarrhea, dehydration, and muscle cramps. Contraindications to the use of this dietary supplement are diseases of the pancreas, kidneys and liver.

The increased demand for creatine concerns mainly physically active, mature and elderly people. This product is an essential element of energy processes related to muscle contraction and has a significant impact on both aerobic and anaerobic capacity. Thanks to it, the synthesis of muscle proteins becomes more effective, while regeneration after training is faster. These factors can lead to the optimization of the development of muscle mass.

The improvement of the body's efficiency, which can be obtained thanks to creatine, is the cause of increasing the exercise and training capacity. This is conducive not only to the development of muscle mass, but also in many daily activities. This amino acid is the basis of supplementation in many sports disciplines, because it is considered effective in terms of muscle development and at the same time safe.

The effect of creatine on the development of muscle mass

The correct supply of creatine increases the exercise capacity, and the protein synthesis is also stimulated through anabolic and anti-catabolic effects. Thus, the endurance and efficiency of the body is significantly improved, regeneration after increased effort is more efficient and definitely faster, you can observe an increase in strength and an increase in lean body mass. The effects are noticeable quickly, which is another advantage of the described chemical compound.

Phosphocreatine reduces muscle acidification, so you can resume physical activity faster with full loads. Taking creatine causes the stimulation of protein synthesis in the muscle tissue, and also contributes to the increase in hydration of the muscle cell, which affects its anabolism. A cell that is adequately hydrated has a much greater ability to grow, and its strength also increases.

Myostatin is a protein that prevents the growth of muscle mass. Creatine, meanwhile, is a natural factor that inhibits myostatin. The described substance also increases the secretion of the anabolic hormone, i.e. IGF-1, produced by the liver. Energy is priceless during strenuous exercise, and free creatine and inorganic phosphorus can lead to an increase in its stores. They support the breakdown of carbohydrates in the muscles, thanks to which the energy level is increased.

The effect of creatine, which directly translates into the growth of muscle mass, is the inhibition of the destruction of this tissue by it. This acid stimulates the growth processes of muscle tissue and makes the water stored in it to a greater extent. This effect is desired not only by athletes, but also by people for whom increasing muscle mass is indicated, such as those leading a sedentary lifestyle, after injuries or in the elderly.

The most common and, at the same time, the best-studied type of the described supplement is creatine monohydrate. It is a combination of creatine and water molecules and can be found on the market in many forms. Usually it is available as a powder or capsules, but you can also buy, for example, bars and gums containing monohydrate. It has been proven that this type of creatine is highly effective, and in addition its price is very affordable.

Monohydrate is an anabolic supplement responsible for increasing muscle strength and performance through protein synthesis due to the high concentration of ATP in the muscles. As a result of prolonged and intense exercise, acidity appears in the muscles, which, however, can be reduced thanks to creatine monohydrate. This type of supplement also has a specific dosage.

Dosing creatine monohydrate can be, for example, through the so-called a loading phase, which consists in taking 20 - 30 g of this amino acid daily for a period of 5 - 10 days. Thus, you can get an increase in strength and gains in muscle mass. After a maximum of 10 days, the daily dose should be reduced to 10-15 g, although the serving size depends on the body weight, as there should be 1 g of the product for every 10 kg of body weight.

Another type of creatine is malate, which is obtained from creatine monohydrate and malic acid. It is a glucose metabolite and therefore stimulates insulin. The transport of creatine to the muscles depends on this hormone. The proportions of ingredients in this type of supplement are usually 3: 1, or 2: 1. It is taken in the form of an odorless, white powder.

The main action of malate is to increase the reserves of phosphocreatine in the muscles, which leads to faster restoration of basic energy units - ATP. Thanks to this product, the muscles gain an increased ability to accumulate glycogen, which in turn translates into greater energy reserves during training. The unique benefits of the use result from the addition of malic acid.

Malic acid acts as an intermediate in the Krebs cycle, which initiates anabolic pathways and helps the body produce energy. The combination of creatine with this acid leads to the formation of a compound that is much more soluble in water, and thus also better digestible than the standard monohydrate. Malate is more effective in the faster restoration of ATP, which is the main task of creatine, and also helps to reduce stomach discomfort. In addition, this form is more stable, so it is not converted to creatinine so quickly.

Creatine ethyl ester, in turn, is a substance with a very strong anabolic and anti-catabolic potential, resulting from the esterification of creatine, which increases its bioavailability. Thanks to this treatment, the absorption of this chemical compound is improved, and thus its share in the muscle tissue is increased. The action of this type of creatine is mainly based on increasing creatine phosphate in the muscle tissue.

After strength training, muscles recover faster, while an increase in muscle creatine increases cellular capacity, which results in more water and glycogen being stored. This phenomenon is called sarcoplasmic hypertrophy. Increasing cell hydration does not necessarily mean muscle growth, but you can feel a rapid increase in strength, although it is often accompanied by an increase in mass.

Creatine citrate is another type of this supplement, which is a combination of one molecule of creatine and three molecules of citric acid in one molecule. The liquid solubility of such a product is better and it is characterized by greater chemical stability in an acidic environment. The ionized form of citric acid actively participates in energy changes taking place in the body, giving additional properties to creatine.

How to use creatine?

The optimal dose of creatine is an individual matter, depending on gender, age, body weight or the intended effect. The daily dose of this substance for women is usually about 3 g, in men it ranges from 4 - 5 g. However, often this supplement is taken in the form of "loading", that is, taking high doses for a short time and then gradually reducing them. This is to build up a reserve of creatine in the muscles, and then maintain its high level.

People who are on a reduction also reach for creatine, because despite the fact that it causes an increase in mass, it does not contribute to the growth of adipose tissue. If this amino acid is supplemented frequently and in small doses, it should be supplemented on training and exercise-free days. Whenever possible, creatine should be taken after physical activity, as cells with an energy deficit will readily absorb this substance.

It is not recommended to take this chemical compound before training, because there may be an impairment of the action of sugars. There are no indications to take this drug on an empty stomach, but you must remember about very abundant hydration of the body when taking it. It is highly inadvisable to consume alcohol during this period as it may lead to dehydration and deterioration of creatine absorption.

Among the particularly recommendable supplements is creatine malate, which effectively increases physical performance during short and intense exercise. It dissolves very well and is resistant to the acidic environment of the digestive system. Creatine powder, intended for consumption before training, is a proven way to increase muscle strength and strengthen the figure.

Creatine monohydrate supports the hydration of the muscles by drawing water into their cells, which helps to achieve the desired muscle pump effect. The composition of this product includes, for example, malate creatine, which increases endurance, as well as creatine gluconate, in which it is attached to fast-acting glucose. Taurine and anhydrous betaine, also present in the composition, increase muscle fullness, providing the said pump. The product was enriched with minerals and an extract that increases insulin levels, and thus helps to maintain a stable blood sugar level.